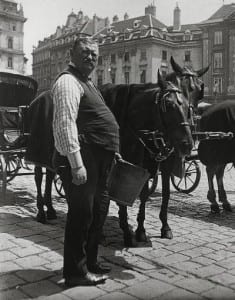 Am Hof at Vienna: A cab supplies his horses even with water. 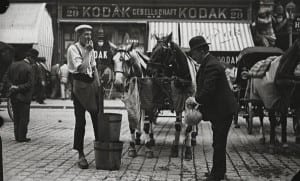 Vienna and his cabs have a long common tradition. From this attachment one of the best known Viennese songs testifies from 1885. Today journeys with the horse carriages count to the most popular tourist attractions. Cabs, the historical wage carriages, are not to be imagined as not existing in the townscape of Vienna and present the picturesque scenery of Vienna from a special perspective to the guests and visitors all year round.
Many horse carriages are more than 100 years old and offer an attractive possibility to admire the numerous places of interest. Enjoy the incomparable atmosphere of a cosmopolitan city in a comfortable cab journey and are astonished at the impressive splendour constructions and palaces of the longest last time. With a city tour you discover the enchanting ambience of Vienna and feel in the history of the empire restored.

Stands are on the place Stephans, heroic place, Michaelerplatz and Peter’s place as well as in Burgtheater and in Albertina behind the Viennese state opera. The prices of round trips of different length are settled by the city of Vienna.

Since 1984 there are with the Viennese cabs also female coachmen. Since 1998 a special check, the driving service check is in Vienna inevitably to be allowed to steer a cab. Within the scope of this check are also required grounding about the most important Viennese places of interest., Among the rest, the traditional clothing of the cab drivers regulates. The factory regulations for cab and horse hired car enterprise. 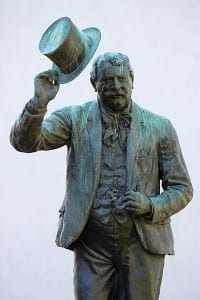 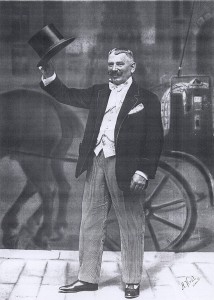 The cab monument of Josef Engelhart on the Viennese cab place in 1030 Vienna.
When during the sixty-year-old’s years the renovation was carried out all around Hainburgerstrasse, was clear that there will be there once the cab place. For this location a monument should be created because the bronze figure coming in 1937 from Josef Engelhart had landed Vienna, lane Veronika 12, in the meantime, in the court of the “cab museum” in 1170. As an Engelharts model for the cab is valid Josef Schmutz who was called in general “Schuaster Fraunz”.

Additional Information:
As the Fiaker came to his name, Saint Fiacrius

The name derives from the Irish hermit Fiacrius (610-670), who left his homeland to serve in solitude.

He received from Bishop Faro of Méaux a forest to see in solitude, near the city and the accuracy of a hermitage, which later became the monastery of Breuil Meaux.

Legend has it that the forest became a thriving garden when Fiacrius touched the earth with his staff.

In Paris, a church, the church of Saint Fiacre and the corresponding street named after him.

In this Rue de Fiaker exists a pictorial representation of the hl. Saint Fiacre

In 1662, the merchant and horse dealer Nicolas Souvage offered his first horse-drawn carriage with coaches in Paris in the Rue de Fiaker for rent.

The holy Fiacrius received the heavenly patronage over the new profession.

And this is where the face of the Viennese Fiaker begins. The idea of ​​the Paris pay coach was taken over in Vienna about 310 years ago – and around 1720, the name “Fiaker” came to life. A Fiaker consists of three parts – the horses, the coach and the driver.

He is still the patron saint of the Viennese Fiaker.

Two-horse-drawn carriage, also the name of the pay-driver Fiaker
The noun was in the 18th century. borrowed from French Fiaker, was bald but only in Austria and Bavaria in use and was otherwise displaced by droschke.

Br. Fiaker probably goes back to the name of the Parisian Hotel St. Fiaker, in which the first rental office for wage drivers existed in the 17th century.

In 1811, the Dessau horse trader Alexander Mortgen (or Mortier) held the “Warsaw” cabs “in Berlin, which were already in use in Petersburg and Warsaw.

These were one-horse cars with half-fold for two passengers.

Tomorrow took over the name of cabs (Russian Drozki “light car, which belongs to Russ. Droga” connecting rod “belongs between the front and rear axles”) and thus hang the name in the German linguistic usage.

Where the word carriage comes from

It was a Hungarian wagon maker from the west, who invented the suspension of the wagon body in 1515 with leather straps.
Where the terms tip and kickback come from Vienna

As a public transport was the stagecoach of the Empress Maria Theresa in the 18th century and the travel reports of the Zeitklingen anything but romantic: laborious and uncomfortable was the ride “In addition. Since the coachman was often tedious and you did not want to stop, the invitation to a drink, the “tip” should. Depending on the amount, this also influenced the coachman’s better driving style. Only the throat of the brave posthornblower had to be well moistened. A custom that is still familiar today, albeit in other contexts.

In 1693 Emperor Leopold granted Emperor Leopoldder I the license for the first Viennese “Lohnkutsche”. These were uncomfortable, unsprung and difficult to steer two-horse carriages, their biggest competition in front of the chair carrier.

Although the Fiaker initially had the advantage over the carrying chairs that they would go beyond the limits of the ring wall, but they were much more than the palanquins, as the horse husbandry went into the money. Their disadvantage was that the comfort left much to be desired. So it was not surprising that the business of the first Fiaker was slow. First as the development of the car construction progressed improved steering systems, the suspension of the Englishman Henry Mill – also increased the turnover figures of the Lohnkutscher. The invitation made by the chair-carriers “Carry on, Your Grace?” was modified by the coachmen in “Fahr ‘ma, Your Grace” and adopted more and more by the pedestrian.

In 1702, the first contracted-carriage regulation was issued.
The police requirements demanded right from the start stated that the cars had to be numbered and that the drivers had to demand fixed prices. Heldenplatz
They were only allowed to take more than 4 miles. This was circumvented by “stacking”, as they called the slow drive in search of passengers. The stacking was also not out of fashion when the Fiakern 1785 some fixed seats were assigned.

At some corners of the house you can still see low, rounded edges today. These were created by the “speeding” of the Fiaker, which wanted to make the higher fare compared to the litter carriers justified and therefore often damaged in their breakneck, often breakneck corners. But they also came into the enclosure of the royal carriages and private carriages of the nobility, which had to give priority despite unwritten law.

If you look at a street sweeper these days, it is hard to believe that the Fiakers were the catalyst for this urban service. In the streets and alleys, which were still largely paved, it

was customary at the time to pour the filth outside the door. Fiaker, Lohnkutscher and Einspänner there were more and more – and thus the road pollution and odor pollution increased by the excretions of the horses.
On December 12, 1738, an imperial patent ordered that all homeowners and owners of vaults – including those in the suburbs – regularly recycle the rubbish of the street in front of their houses or vaults, so that the once-a-week by-cart of the Municipal Chamber of Under-Chambers closed the rubbish could get away.
But the Viennese did not play (returned). So the city fathers decided, according to the model of other cities, to take their own street sweepers into service.

In 1785, the Fiaker finally received two “official” stands Michaelerplatz- at the Graben and Michaelerplatz. However, that did not change the hard competition.

The Fiaker had developed their own code of practice, met each other in local bars, had their own guild and held together against others. The daily confrontations with foreign land-coaches, chair-carriers and the Zeiselwagen-Kutschern, which actually only outside the ring wall, ended for the amusement of many also often in fisticuffs spiced up with the typical Viennese curse-vocabulary – (probably the first public free standing stage).
A strong and serious competition, however, were the elegant, four-seat closed Janschky cars offered with liveried coachman. Particularly high-ranking personalities and aristocrats preferred these cars without number and inscription at discreet rendezvous, but had to be ordered in time.

On April 22, 1824, the “four-miles ban” was repealed, but at the same time again made some new prohibitions. Fiacre
The torches to illuminate the way now had to be extinguished because of the fire danger on the ground and in the woods. In addition, it was forbidden for the drivers to hit the house wall with the torch at home, so that the sparks flew just to attract attention.
In case of non-compliance, the coachmen were threatened with corporal punishment, the confiscation of horses and wagons, a fine or arrest.

Fiaker was an important and respected profession. You had to prove to be a good driver with character, horse skills and manners. The Fiaker could not have another profession. While the rules were strict, the benefits were huge. They did not have to do military service, and if a Fiaker died, his widow could take his place.

If it serves the “Gaudi” found the Viennese even interested in technical innovations. Vienna used modern means of transport for other major cities. The subway in London was already three years old when the horse treadmill was just introduced in Vienna.

By the abolition of the numerical restriction in 1859, there were more than 1,000 fiakers as a respected professional fiaker. But the citizens and servants preferred to walk, which did not change the introduction of the Pferdetramway 1865. For a short drive that lasted only a few miles, in 1875, 10-12 cruisers were paid, which was equivalent to one kilo of bread, or almost double the hourly wage of a laborer.
At that time, about 700,000 people lived in Vienna. In addition to the 10-year-old horse tramway, there were 1,149 fiakers, 1,352 one-horse, 890 Stellwagen and 174 city car, with the tramway already had a share of 60% of daily passenger traffic.

From 1903 began the displacement of the carriages by the automobiles. In 1925, even the first cars were decorated for the traditional flower parade in the main avenue in the Prater.

After World War II Americans in Vienna there were only a handful of horses left in Vienna. The Viennese preferred to use the cheaper “Bim”, and those who had more money took a quick taxi. The Americans of the occupying forces were the first passengers who saved the Viennese Fiaker from the final end. After that, tourists came back to the country. In 1936, 25 vehicles trotted through Vienna, in 1967 there were 32 and in 1991 there were 47, with a further 34 concessions being awarded, which, however, were voluntarily not used for reasons of reason and economy in the sense of the Fiaha entrepreneurs.

Converted from passenger transport to tourist attraction, the pitches were drastically reduced.

In recent years, the “horse manure – Disposal” was hotly debated – an idea that fortunately so far in the sense of horses who can not speak, was not realized. Mist bag
Furthermore, the “new Fiaker” even had to introduce dress and behavior regulations and legal protection for horses and the safety of the carriages, since the sneakers on the coach-stands, lame horses and non-safety-driven carriages had already entered what the ” “Fiakern was a thorn in the eye.

Now there are already about 150 concessions Fiaker (at least 300 horses), of which, however, thanks to the statutory new regulations by the 58 place cards every day about 184 horses on the official side must be in the barn.

Perhaps, however, one finds a solution so that the Fiaker can call as one of the Viennese landmarks for some time: